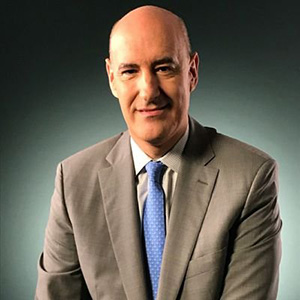 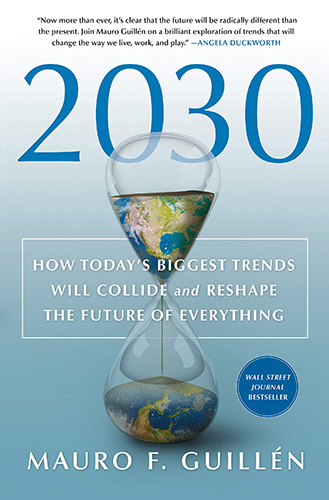 author of "2030: How Today's Biggest Trends Will Collide and Reshape the Future of Everything"

Mauro Gullen, author of "2030: How Today's Biggest Trends Will Collide and Reshape the Future of Everything"

Mauro F. Guillén is one of the most original thinkers at the Wharton School, where he holds the Zandman Professorship in International Management and teaches in its flagship Advanced Management Program and many other courses for executives, MBAs, and undergraduates. An expert on global market trends, he is a sought-after speaker and consultant. He combines his training as a sociologist at Yale and as a business economist in his native Spain to methodically identify and quantify the most promising opportunities at the intersection of demographic, economic, and technological developments. His online classes on Coursera and edX have attracted over 100,000 participants from around the world. He has won multiple teaching awards at Wharton, where his presentation on global market trends has become a permanent feature of over fifty executive education programs annually.

As Director of the Lauder Institute of Management & International Studies between 2007 and 2019 he revolutionized the world’s premier graduate international program combining the Wharton MBA with a degree in International Studies by launching innovative learning experiences such as the Global Knowledge Lab, the Lauder Intercultural Ventures, and the first Africa-focused academic program at a major business school. These contributions earned him the Aspen Institute’s Faculty Pioneer Award.

His research, teaching, and speaking incorporates both numerical assessments of trends and illuminating examples from business, politics, and everyday life. He shows in accessible terms that one can accurately forecast trends by systematically following the babies and following the money into the future. His research has earned him many distinctions, including Fulgright, Rockefeller, and Guggenheim fellowships, a membership in the Institute for Advanced Study in Princeton, and prizes from the Academy of Management, the American Sociological Association, the Social Science History Association, and the Gustavus Myers Center for the Study of Bigotry and Human Rights. He is an elected member of the Sociological Research Association and the Macro Organizational Behavior Society.

His research, op-eds, and commentary have been featured in numerous outlets, from the New York Times and the Wall Street Journal to The Economist, and the Financial Times. He has appeared on radio and TV shows such as NPR’s Marketplace and Radio Times, CNBC’s Mad Money and Squawk Box, and CNN’s Fareed Zakaria GPS. He is a seasoned public speaker at conferences, conventions, forums, and corporate events organized by industry associations and Fortune 500 companies. He serves or has served on several advisory groups, boards of directors, and nonprofit boards of trustees.

His book on 2030 AD: How Today’s Biggest Trends Will Collide and Reshape the Future of Everything will be published by St. Martin’s in 2020, with translations into Italian, Japanese, Korean, Mandarin, Romanian, Turkish, Portuguese, Spanish, and Vietnamese.

The Book: "2030: How Today's Biggest Trends Will Collide and Reshape the Future of Everything"

INSTANT WALL STREET JOURNAL BESTSELLER!  ”Bold, provocative…illuminates why we’re having fewer babies, the middle class is stagnating, unemployment is shifting, and new powers are rising.” —ADAM GRANT  The world is changing drastically before our eyes—will you be prepared for what comes next? A groundbreaking analysis from one of the world’s foremost experts on global trends, including analysis on how COVID-19 will amplify and accelerate each of these changes.  Once upon a time, the world was neatly divided into prosperous and backward economies. Babies were plentiful, workers outnumbered retirees, and people aspiring towards the middle class yearned to own homes and cars. Companies didn’t need to see any further than Europe and the United States to do well. Printed money was legal tender for all debts, public and private. We grew up learning how to “play the game,” and we expected the rules to remain the same as we took our first job, started a family, saw our children grow up, and went into retirement with our finances secure.  That world—and those rules—are over.  By 2030, a new reality will take hold, and before you know it:  - There will be more grandparents than grandchildren - The middle-class in Asia and Sub-Saharan Africa will outnumber the US and Europe combined - The global economy will be driven by the non-Western consumer for the first time in modern history - There will be more global wealth owned by women than men - There will be more robots than workers - There will be more computers than human brains - There will be more currencies than countries  All these trends, currently underway, will converge in the year 2030 and change everything you know about culture, the economy, and the world.  According to Mauro F. Guillen, the only way to truly understand the global transformations underway—and their impacts—is to think laterally. That is, using “peripheral vision,” or approaching problems creatively and from unorthodox points of view. Rather than focusing on a single trend—climate-change or the rise of illiberal regimes, for example—Guillen encourages us to consider the dynamic inter-play between a range of forces that will converge on a single tipping point—2030—that will be, for better or worse, the point of no return.  2030 is both a remarkable guide to the coming changes and an exercise in the power of “lateral thinking,” thereby revolutionizing the way you think about cataclysmic change and its consequences.