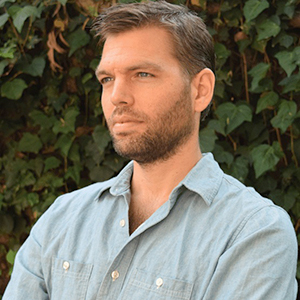 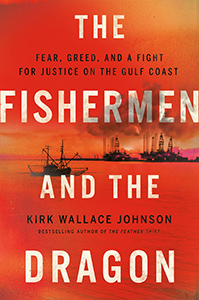 author of "The Fishermen and the Dragon: Fear, Greed, and a Fight for Justice on the Gulf Coast"

Kirk Wallace Johnson, author of "The Fishermen and the Dragon: Fear, Greed, and a Fight for Justice on the Gulf Coast"

Kirk Wallace Johnson is an author and screenwriter. His books include The Fishermen and the Dragon: Fear, Greed, and a Fight for Justice on the Gulf Coast, The Feather Thief: Beauty, Obsession, and the Natural History Heist of the Century, To Be a Friend is Fatal: the Fight to Save the Iraqis America Left Behind. He is also the creator of Drug Spies, a scripted series about pharmaceutical espionage. He is the founder of the List Project to Resettle Iraqi Allies, which resettled thousands Iraqi refugees who were imperiled as a result of working for the U.S. during the war.

His work has appeared in the New Yorker, the New York Times, the Washington Post, on This American Life, and 60 Minutes, among others.

Prior to founding the List Project, Johnson served in Iraq with the U.S. Agency for International Development in Baghdad and then Fallujah as the Agency’s first coordinator for reconstruction in the war-torn city.

He is a senior fellow at the USC Annenberg Center on Communication Leadership and Policy, and the recipient of fellowships from the American Academy in Berlin, Yaddo, MacDowell, and the Wurlitzer Foundation. Prior to his work in Iraq, he conducted research on political Islamism as a Fulbright Scholar in Egypt. He received his BA from the University of Chicago in 2002.

The Book: "The Fishermen and the Dragon: Fear, Greed, and a Fight for Justice on the Gulf Coast"

Fear, Greed, and a Fight for Justice on the Gulf Coast

THE FISHERMEN AND THE DRAGON

In the late 1970s, the fishermen of the Texas Gulf Coast were struggling. The bays that had sustained generations of shrimpers and crabbers were being poisoned by nearby petrochemical plants, oil spills, pesticides, and concrete. The White fishermen, though, could only see one culprit: the small but growing number of newly resettled Vietnamese refugees who had recently started fishing.

Tensions climbed as White fishermen called for refugee bans and threatened violence in the name of protecting what they claimed was their turf. After a young Vietnamese man killed a White crabber in self-defense, a posse responded by torching Vietnamese boats and a home, leading the Grand Dragon of the Texas Knights of the Ku Klux Klan to sense an opportunity.

Over the next two years, amid a garish campaign of violence, death threats, and arson, with terrifying Klan rallies and boat patrols, many Vietnamese were ready to flee – until a charismatic South Vietnamese colonel convinced them to stand their ground and put their trust in the Constitution.

Throughout the dizzying clash, which culminated in a tense courtroom showdown, one woman could see clearly enough to recognize the true threat to the bays—and her determination to take on the real villains became the fishermen’s last hope.

It’s a story that braids corporate malfeasance with a battle over shrinking natural resources, at a turning point in the modern white supremacist movement, and highlights one woman’s relentless battle for environmental justice.