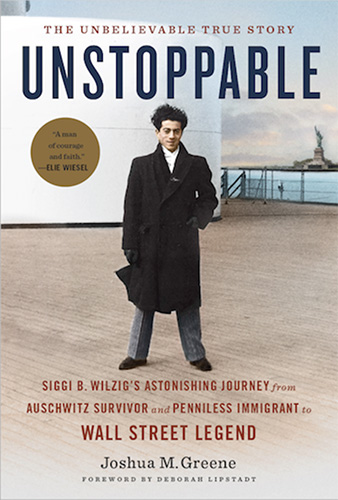 JOSHUA M. GREENE is a popular lecturer on Holocaust history and the spiritual quest, and a brilliant, entertaining communicator. A former instructor at Hofstra and Fordham Universities, Greene is recipient of numerous awards for his historical biographies and documentary films.

Greene is the author of several acclaimed books, including the bestseller Here Comes the Sun: The Spiritual and Musical Journey of George Harrison. His book Justice at Dachau: The Trials of an American Prosecutor, was called “Riveting—destined to be a classic among Holocaust histories” by Douglas Brinkley, Presidential Historian for CNN. His renowned work on survivor testimony, Witness: Voices from the Holocaust, was the basis of a feature documentary for national PBS, named “One of the Ten Best Holocaust Film” by Facets Media.

He is author of a series of Holocaust survivor memoirs for Scholastic that have sold more than a quarter million copies. Currently, he teaches Mindfulness in the Workplace for the Zarb School of Business at Hofstra University.

Unstoppable is the ultimate immigrant story and an epic David-and-Goliath adventure. While American teens were socializing in ice cream parlors, Siggi was suffering beatings by Nazi hoodlums for being a Jew and was soon deported along with his family to the darkest place the world has ever known: Auschwitz. Siggi used his wits to stay alive, pretending to have trade skills the Nazis could exploit to run the camp. After two death marches and near starvation, he was liberated from camp Mauthausen and went to work for the US Army hunting Nazis, a service that earned him a visa to America. On arrival, he made three vows: to never go hungry again, to support the Jewish people, and to speak out against injustice. He earned his first dollar shoveling snow after a fierce blizzard. His next job was laboring in toxic sweatshops. From these humble beginnings, he became President, Chairman and CEO of a New York Stock Exchange-listed oil company and grew a full-service commercial bank to more than $4 billion in assets.